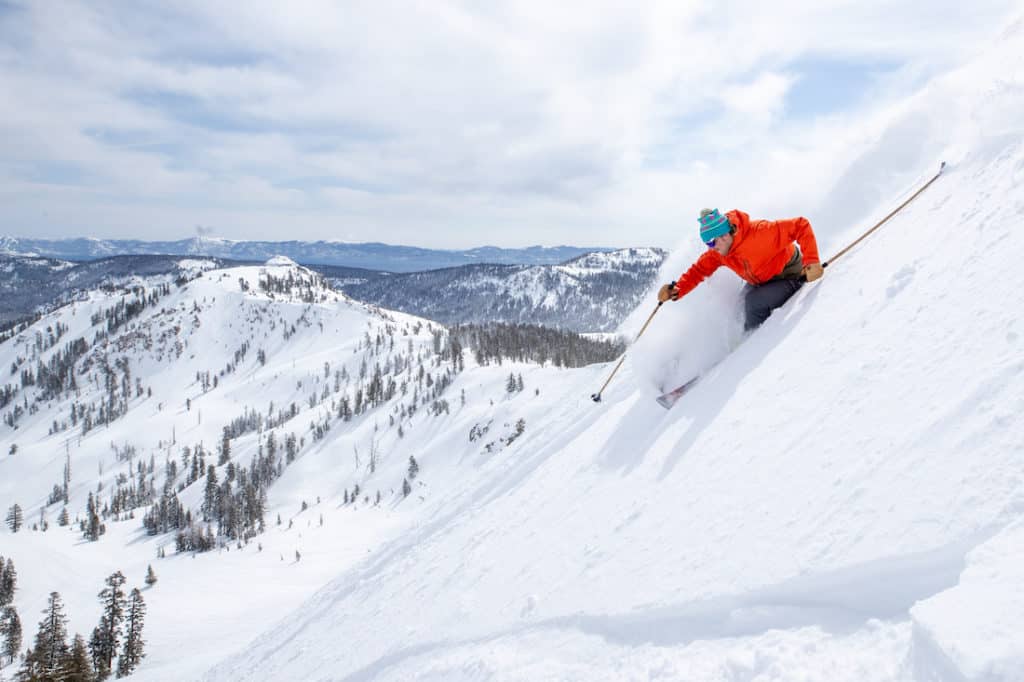 Did you know that Squaw Valley Alpine Meadows will be the first ski resort to be powered by 100% renewable energy? To spread the word about both the resort and the music festival’s green initiatives, we hosted a panel discussion in our WinterWonderGrass Squaw 2019 Media Tent featuring Michael Gross (Squaw Valley’s Director of Environmental Initiatives) and Marina McCoy (Waste Free Earth). Turns out, there’s more going on behind the scenes than you might think, and it’s all good things!

When Squaw first presented the challenge to their energy provider, Liberty Utilities, they were prepared to go separate ways in the event that their proposal wasn’t supported. As it turned out, Liberty’s plans to shift into the use of renewables were directly in line with Squaw’s, so it made great sense to work with one of their largest clients to make the switch.

The resort will pull all their power from a massive 60-megawatt solar panel (enough to power over 1,200 homes) and then pay a premium to Liberty Utilities on each kilowatt hour that’s not met by the solar panel. Liberty Utilities then uses that capital to propel even more clean energy production, which then allows other businesses and customers to access renewable energy on a smaller scale. The plans for the whole program are sitting on the State of California’s desk and are due to be approved within the next couple months.

“For me, it’s a really cool educational process about how legislation really drives change. Legislation is created to develop these programs, then we can support it, and ultimately move to 100% renewable energy.” -Michael Gross

Aside from this massive energy project, Squaw Valley Alpine Meadows has held a focus on sustainability initiatives for quite some time. Through their campaign called “Drink Mountain Tap,” they were the first resort in North America to ban the sale of single-use plastics, and instead offer reusable bottles for the same prices as most single-use bottles. When guests buy these reusable bottles, they’re given the opportunity to take Squaw’s mindset off the slopes and out into the world in order to see bigger changes. That same opportunity is directly in line with what WinterWonderGrass hopes to accomplish- take what you learn and feel here at the festival or on the mountain, and take it out into the world.

Marina McCoy, founder of Waste Free Earth, is in charge of all of WinterWonderGrass greening and sustainability efforts. Simply put, she’s incredible. McCoy and Gross share the goal of educating guests and employees about convenience versus necessity.

WinterWonderGrass gives each attendee a reusable cup, a nice one that they’ll want to take back out into their everyday lives. All trash, compost, and recycling from the festival (yes, all of it!) is sorted and the festival’s compost is taken to Full Circle Compost. In the future, Marina hopes to move the festival away from even offering compostables at all, given that compostables are still technically single-use, and most composting companies really prefer to not have compostable plastics in the mix.

“We noticed a few years ago that after the first day of the festival, there were almost no compostable cups on the ground. But after the first day, people were afraid to bring their cups into the event because they didn’t want to lose them. That was going against our whole program, and we wanted to give people the confidence to bring their cups in to the festival. So we began to charge a dollar for every compostable cup, and we saw a huge shift. Instead of giving a dollar off when you use your reusable cup, we saw a much bigger reduction when we charged a dollar for the compostables.” – Marina McCoy

This simple shift in the program encourages people to move away from fear of losing the cup, towards a more confident mindset. If you really want to avoid buying all these compostable cups when you’ve just been given a reusable one, chances are you’re not going to lose it. Furthermore, you might help your friends remember to bring theirs, help your friends keep track of theirs, and so on and so forth. This is what a global shift looks like on a micro-level.

In addition to renewable energy, and the Drink Mountain Tap initiative, Squaw Valley Alpine Meadows partnered with Protect Our Winters (a partner of WinterWonderGrass as well) to incentivize carpooling to the mountain. Guests who carpool are offered premium parking spots, and according to Gross, people are starting to get it and to use it. Some 22,000 carpooled cars have been parked this year, which is a huge improvement.

Despite these incredible efforts on the part of Squaw Valley Alpine Meadows and Waste Free Earth, there’s still room for growth. Music festivals and ski resorts are at the top of the pyramid as far as how climate change can affect business. If we can all keep working together to make simple changes in our lifestyles, and remember the idea of convenience versus necessity, we’ll have a greater chance of being able to enjoy outdoor recreation on mountain resorts, at music festivals, and beyond.

The April 2021 playlist is live on @spotify! Check

There’s a banjo joke somewhere in this tram 🪕