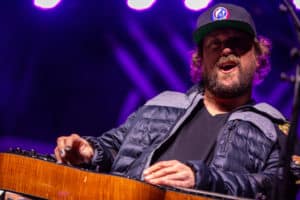 This week we caught up with Greensky Bluegrass’ Anders Beck over an extended interview. We talk about the absolutely breathtaking video for “Wish I Didn’t Know” filmed at the summit of Squaw Valley Alpine Meadows, who in the band loves snowsports (or who avoids them!) and what they love most about returning to WinterWonderGrass year-after-year.

Check out the video for “Wish I Didn’t Know” and read on below.

Can you speak to the inspiration behind the video for “Wish I Didn’t Know”? Who’s idea was it to perform on top of the peaks at Squaw Valley Alpine Meadows?

I believe it was Dylan [Langille]’s idea, but I’m not totally sure. He’s our tour photographer and videographer and was super psyched about it, so we were too!

You’re used to playing to large crowds and in some of the country’s most beautiful venues (Red Rocks)! What was it like to play for Mother Nature and having the panoramic views one can only achieve from a mountain top?

Well, honestly, some of my personal favorite places to play are those in which Mother Nature is clearly present. Places like Telluride Bluegrass Festival or Red Rocks or some of the other beautiful outside venues we get to play. Sure there are 10,000 people there, but I find myself playing to the scenery in those situations as much as to the people. Those situations can be really special. This was one of them!

And would you say it inspired your playing to have Mother Nature so present?

I think it did inspire our playing, yes. if nothing else, it put us in a good mood for a relatively cold video shoot. it was gorgeous up there!

How long did it take to get all of your gear up to the top and was it hard to hear everyone with the minimal backline?

We spent about three days hiking up to this spot with all of our gear for this video shoot… it was hard, but really worth it. I’m just kidding! We took the gondola up. It was pretty easy, actually. All the folks who work at Squaw Valley were super helpful and awesome. The only hard parts were trying to keep instruments in tune in the cold and changing weather, keeping our hands warm, hearing each other while playing on top of a mountain, and looking cool in puffy coats. That’s all!

Who on the band loves snow and gets on the mountain during the winter?

Everybody except for Paul [Hoffman] gets out and rides on the snow during the winter…it’s for his own safety! * I used to ski a lot more than I do now. I used to be a badass, now I just have fun with it and try not to break myself.

* The guys found out a while ago that he likes to go fast and doesn’t really know how to stop. Not a good combo on the mountains!

As a returning artist on the bill, can you share something about WinterWonderGrass that stands out among the other music festival out there? Why do you love returning?

Everything about WWG is unique! Are you kidding? It’s a festival, outside, in the mountains during the winter… and it goes off as hard, if not harder, than a lot of festivals in the summer! There is something inherently amazing about it. There is a feeling of camaraderie among everyone there. It’s not the easiest festival to attend, but it’s worth it!

What’s it been like to be a member of this community throughout the years?

I’m really honored to be a part of the WWG community. I know I’ve said it a bunch, but it really is special. Skiing with friends all day and then playing music all night…if you had told me 15 years ago that that would be my job when I grow up, I would have cried tears of joy.

Any advice for the first-timers (attendees and musicians)?

Take a peek at who else is on your same bill. Who are you most excited to see perform at the festival? What collaborations do you anticipate (either your own or others)?

I’m excited for so many things on the lineup this year! It’s great to see so many badass ladies on the lineup! I love Lindsay Lou and Della Mae and lots of the other ladies on the lineup. I love the McCoury’s and I love when Keller Williams plays with The Keels. It has been so awesome to watch the world react to Billy Strings… he’s the freaking man. Stickley, Cris Jacobs…. the list goes on and on. It’s one of those festivals where I always anticipate lots of collaboration between us and all of our great musician friends.

Other than your performance at WWG, what else is coming up on your docket between now and then? In 2020?

There is so much stuff for me to look forward to that it is almost overwhelming at times. I’m so lucky to get to travel around this country with my 4 best friends and play music every night. I am really looking forward to Strings and Sol in Mexico and our three-night New Years’ Eve run at The Riverside Theatre in Milwaukee. We’re playing a few nights at The Anthem in Washington, D.C, which is an incredible new venue. It’s a hard question to answer because I feel like I could just list every show coming up, because I am honestly super excited about each and every single one of them. As I mentioned, I am super grateful and lucky to get to do what we do. The band is playing really well right now and having lots of fun doing it!

On Monday, November 18th in partnership with Greensky Bluegrass, WinterWonderGrass is running a contest surrounding the Steamboat stop. The contest will run through Monday, November 25th and fans should enter via the band’s Facebook page.

Enter for a chance to win two sold-out VIP tickets to Steamboat and the opportunity to watch the band side stage during their WWG performance, two Steamboat lift tickets good for WWG weekend, two seats at Thursday’s Mountaintop Dinner with Keller Williams, a custom WWG Never Summer snowboard and two tickets to Greensky Bluegrass at Denver’s Mission Ballroom this December 6th or 7th, winner’s choosing. 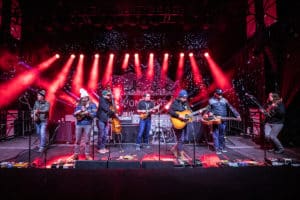 RiverWonderGrass. This week, our team sets out on

Sam Bush got DUSTED year one at Squaw! #throwback

Heeeeey! We love ya! #winterwondergrass