Through The Lens: WWG Photo Crew

Chances are, if you’re reading this, you’ve seen some of the incredible images created by the WinterWonderGrass team of photographers: Dylan Langille, Tobin Vogesser and John Ryan Lockman. They come back, year after year, to capture the nearly indescribable magic of these events – the people, places, and artists.

“They care about the festival. This is a group of people that care deeply about the music, the community, the comradery, and the location of the event.” – Scotty Stoughton, Founder

We sat down with three of the veteran members of the photo team at the end of the WinterWonderGrass season to get some insight behind the lens and find out what inspires them.

Dylan Langille started shooting music 10 years ago. He got into the music scene through friends and figured out that if he applied for press passes, he could go to shows for free. From there he just slowly started trying to get to know people. Meeting the String Cheese Incident crew was his first “break” as a photographer. Now he is a full-time photographer and primarily tours with WinterWonderGrass headliner Greensky Bluegrass. He continues to work with String Cheese Incident and other music festivals when his schedule allows, but Greensky keeps him incredibly busy.

Tobin Voggesser: “Dylan’s being a little bit modest. He’s not only the photographer for Greensky, but he also does all of their videography, so if you’ve seen anything Greensky in the last few years, that’s all this guy right here. I like to say that he has helped bring their band to another level because people see how epic the shows look, and then they want to come to them. Bringing him on the road has helped with that.”

Tobin always has had a knack for the creative; in high school, his best grades always came from his art classes, and he found joy in many different art mediums. It wasn’t until he took a photography class that he realized he’d found what he was searching for. Realism was what he couldn’t do as a painter. With photography, what you see is what you get, and that appealed to him. He started that path in Iowa where he grew up and then went off to the University of Kansas and to study journalism, but quickly realized he’d have to do 2.5 years of what he likes to call “bullshit school,” or the core classes. He was put on academic probation and then decided it was time to go. He found Colorado Mountain College’s 2-year associate’s degree. Once he graduated, he realized that while he’d been taught plenty about photography, he still had a lot to learn about how to actually make it his profession. 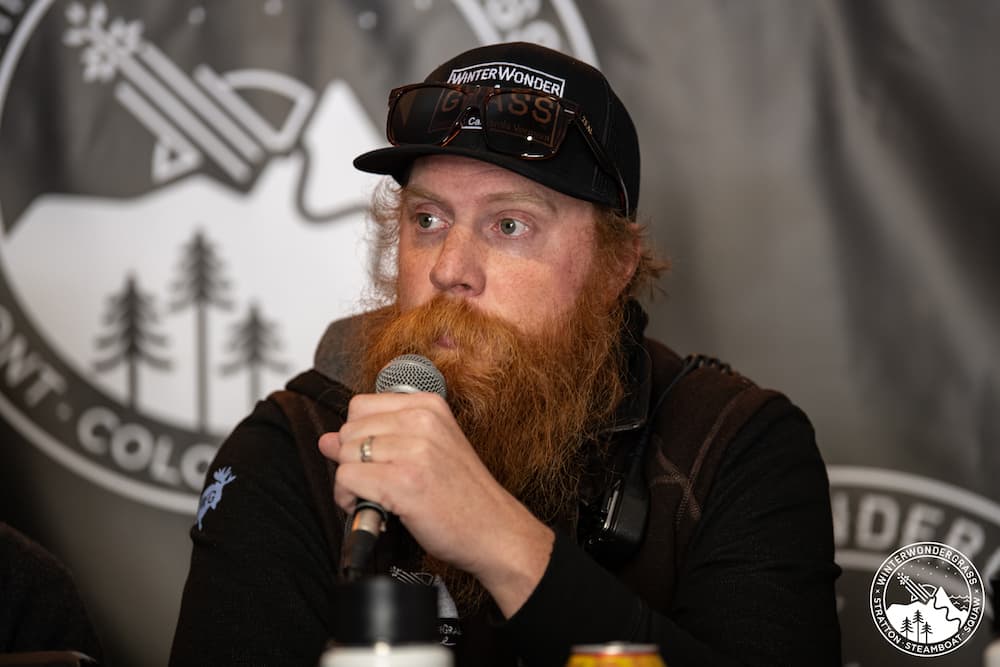 After trying out a few jobs shooting stock photography and assisting other professional photographers, he moved to the Front Range and began as a music photographer for JamBase.com. Initially, he was shooting film: five rolls per concert, $7 a roll, plus $7 more each for processing. It was all adding up quickly, and the pay wasn’t great. He knew he had to find a solution, so he moved into the digital world.

Yonder Mountain String Band hired him to shoot Red Rocks for his first real paid gig, their first sold-out show. About five years later he decided he wanted to start working with video as well to expand his income. At the time, it seemed like nobody was really shooting video. He joined up with his friend Jesse Borrell and they formed No Coast, which he now shoots for full-time.

John Ryan Lockman grew up in Athens Georgia. He grew up going to the Georgia Theater, loving music, and really wanting to somehow get involved in it. After college, he moved out to Vail. He began shooting at Statebridge, a small music venue outside of Vail where many of the folks who work for WinterWonderGrass now also got their start. When you look around a small venue like that, you see so much action; everyone was doing something, whether it was working at the bar, guiding boats, or taking pictures. So JohnRyan’s question was, “How do I contribute?” He realized that photography would be his contribution. He had a full-time job in Vail as a sustainability manager, and is still in this role currently, but he always makes time to shoot.

John Ryan jokes about how he was working with String Cheese Incident until he made the mistake of introducing them to his photographer friend Dylan Langille.

Tobin: “Don’t ever introduce your clients to Dylan!”

For John Ryan, he finds connecting with the audience to be his most rewarding angle. When fans are having a great time with their people and see a photographer cruising through the festival looking for important moments to capture, they’ll often ask for a picture. Audience shots taken by the photography crew have a special way of making the fans feel more connected to the festival. We’ve all been there, right? There’s something really exciting about finding that photograph later on, and being hugely grateful that it’s not a crappy cell phone photo where someone’s thumb is covering half the photo. John Ryan loves to facilitate that connection.

When asked what his favorite part of shooting WinterWonderGrass is, Tobin had similar sentiments. For him, it’s the community. WinterWonderGrass fans are some of the most hardcore music fans in the world. It’s freezing cold. In Tahoe last year, it rained most of the time. The fans stuck it out, because that’s what this community does.

Dylan loves getting to work with those he looks up to- colleagues, friends, musicians. According to Dylan, everyone at this event is “the best of the best,” and it makes his job much easier. It can be intense, but with a great crew, it’s doable. WinterWonderGrass is filled with unique musical experiences that won’t happen anywhere else. The combinations of people you’ll see on a stage are endless, which presents both a challenge and a thrill to those in charge of capturing the moment.

If you look through the “best of” gallery of all the years of WinterWonderGrass, you’ll see nearly equal numbers of stage shots and audience shots. Anyone who knows how to operate a camera can get stage shots. Of course, some are better than others, but it’s somewhat straightforward. This group of photographers, in particular, excels at capturing candid moments out in the crowd. We asked them how they get these shots, and what they’re looking for when they’re roaming the site.

Dylan says his approach is to walk around looking for people that are having a lot of fun. From there, he tries to find a unique perspective to shoot them from. “Sometimes I’ll lay in a puddle,” he says, “or climb a ladder or a tree. Whatever it takes to find that unique way of capturing it.”

“As a young photographer, when I didn’t have photo access, I used to get in trouble a lot for sneaking on stages, climbing stuff I wasn’t supposed to, being kind of dumb and reckless, but for the sake of the shot. So that’s kind of my mentality- not to break rules on purpose, but just not let rules prevent me from getting my shot.” – Dylan

Tobin takes a sneakier approach. He agrees, it helps to look for people that are having the most fun. Smile at them, interact with them, but then walk away and turn around when they think you’re not looking at them anymore. He tries to avoid the eye level shots, and as a result, says that his knees are generally wet from dropping to the ground to capture the moment from a more interesting perspective.

“Sacrifice your clothes for the shot.” – Tobin

When asked about the biggest challenges of being a festival photographer, all three panelists agreed: the business itself. “It can be incredibly difficult as a photographer to prove your value,” John Ryan says, “and to make a living doing that.” Dylan minored in business, and according to Tobin, “It shows.”

“Finding inspiration in places you’ve already been can be equally challenging,” says Tobin. All three of these photographers have been shooting WinterWonderGrass for years. Sometimes approaching the weekend with a new set of eyes, a new perspective, can be very challenging. The idea is to find a way to capture it again, with new feeling, and with better photos than the year before.

For Dylan, the challenges are both internal and external.

“We’re really lucky to get to do what we get to do, and to have these jobs,” he says. “There’s a long line of people out there that would take my job from me in a heartbeat, and I know that. It may not be as big of a line as I think, or my job might not be in jeopardy. It still adds to the challenge. The other one for me is balance. I’m lucky that I get to do what I love. We’re the real 1%. I get to walk around and take pictures and people pay me to do it. If you told me that 4 or 5 years ago, I would have laughed. It’s pretty ridiculous, and so because I love this so much, finding a balance with normalcy in life with the people that I love, other things outside of just taking pictures, traveling on the road, I think that’s really become one of the bigger challenges. Life balance.” -Dylan Langille

Tobin has a four-year-old at home, and is gone for large chunks of every month. Kids grow up quickly, and he doesn’t want to miss it. He’s envious of those who can do what they love, but also do that close to home. Fifteen years ago he might have wanted to just be on the road full time, but family and balance are important.

Photography is a huge part of how the festival’s story and culture escape out into the world. WinterWonderGrass as a whole is incredibly fortunate to have these three talented men on board!

Gather your friends ‘round and tune in next Wedn

Groomers! Photo from our brother in Tahoe @onthed

January playlist! Click the link in bio to save, f

... a night on the river. Join us this Saturday,